Yamamura was born and grew up in the Gunma Prefecture. He became a police detective because he was a fan of Yukiko Kudo's television show in which she played a police woman, Dangerous Policewoman Story.[2] Yamamura, before being promoted to Inspector, was considered a rookie detective. [2] In his first case, he mentioned that the only reason why he was put on the case was because everyone else in his precinct had a cold.[2] His reputation grows after Conan knocks him out to solve a case, which gives him more assignments. Yamamura has a grandmother, named Misae Yamamura,[1] who sometimes gets indirectly involved in Yamamura's cases.[3]

In time, Yamamura was finally named an inspector, which he proudly showed off to Kogoro, Ran, and Conan. However, this annoyed Kogoro, who still called Yamamura "Yamamura-keiji" (Officer Yamamura) instead of "Yamamura-"keibu" (Inspector Yamamura); Conan expressed worry about the future of Gunma police with Yamamura in charge of other detectives, while Ran appeared to be the only one in support of Yamamura's new promotion.[3] Later, he is revealed to work for Division 1 of the prefectural police department which covers only homicide.[7] 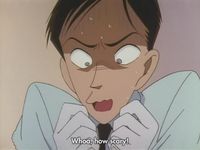 For being a detective, Yamamura makes many unnecessary mistakes, including not noticing completely obvious clues, and even feels fear at the sight of blood or a dead body. He is also incredibly naive and superstitious, fully believing that a "curse" was left by ghosts in a case, to the point of being scared.[8] He even messes up in trying to escort a criminal to Nakanojō forest, deserting his own post because he wanted to buy himself some lunch.[6] He also does not act in good conduct, publicly fawning over Yukiko Kudo when he found out who she was.[2] Misao also once got heavily distracted by a portable television that he brought during a case because he had wanted to watch a romantic drama that was airing at the time of an investigation.[9] And when it comes to Gunma, Misao doesn't even fully know the whole area, and has to be corrected by locals on certain things.[10]

However, even though he is a little clueless, Yamamura still knows the basics of his work and what to do in a crisis. For instance, he often writes in his notebook every piece of information he has been given about the case - even if that does not prevent him from forgetting what he has written,[11]. He is also very supportive, and always wants to lend a helping hand in solving a case. He is not completely lost during murder cases, figuring it out when Conan has to resort to giving out hand signs to him due to losing his voice from a cold.[4] Also, Misao is very handy in helping catch a criminal, having been used by Conan to help confront a criminal that was trying to proclaim their innocence.[12] He also helped catch another criminal, mostly through instructions Conan, pretending to be Kogoro, left for him on his cell phone as a text message.[8] He even tried giving Kogoro credit for the case, showing that unlike Kogoro, he can be modest.[8] However, Conan indicated in the text message that "Kogoro" wanted Misao to take all of the credit.[8]

Whenever Yamamura is involved in catching a criminal, he tends to become very excited. He noted that it felt like a "movie" when he had to shoot one of the runaway robbers in a bank robbery case.[5] He is extremely excited to be involved in helping Eri Kisaki and Conan catch the real killer in another case to the point of acting like a little kid after the killer was arrested, talking about how he acted and looked when confronting the killer.[12] His child-like reactions also manifest on the opposite end of the spectrum. One time when Yamamura decides that he is a bad police officer after making two big blunders during one case, it became up to Conan, Haibara, and the Detective Boys do their best to cheer him up so that he could feel better and lend them a hand in finding Mitsuhiko.[6] Still, he is quite conscious of the importance of his role in society and his profession, making him in morale - if not in skill - a true police officer.[6]

Inspector Misao Yamamura arrived to investigate. Conan also tries to gather clues to help, but is limited to what he can do when a sneaky Eisuke starts to spy and watch him. Conan has to use different tactics so he won't seem suspicious to him. Conan sends a mail to Detective Yamamura as Mouri telling him who the actual culprit is. In the end, Conan said to himself, that the reason that he didn't put Detective Yamamura or Sonoko to sleep is because he noticed Eisuke was watching him.

Misao is the officer sent for this case, and brings a portable TV with him so that he will not miss his favorite drama, "The Maple Leaves of Winter", which he became a fan of, after his grandmother recommended it to him. This drama relates to the case, so he tries to make the suspects confess that they like the movie, without success. To his big disappointment, the drama episode that night was cancelled. He later appears to arrest the culprits, but only after they have already been defeated by Ran and Makoto.

One of the murders of the case having happened on the Gunma border, Misao is called onto the investigation. He behaves as he always does, is immediately despised by Kansuke Yamato, and is even disrespectful towards Kiyonaga Matsumoto. Misao is one of the few inspectors (with Sango) to follow Kogoro's whimsical theory about the murder, and he is eventually the only one to come with him when he leaves the headquarters on his own, saying he is going to catch the culprit. He still plays a role in the movie, by hearing Vermouth dialing her Boss' phone number; the tune unconsciously makes him whistle the Nanatsu no Ko song, leading Conan to suspect that a member of the Organization infiltrated the meeting.

In the Onino village, Yamamura is called there after a possible murder has occured at the village's fossil excavating site and museum's toilet. The victim was the museum's owner who was poisoned and Yamamura quickly deduced that the victim is likely to have been murdered and that the two other guests are the suspects. After the sunset, Conan used Agasa to solve the case instead of Yamamura and, seeing the culprit, Yamamura exclaims himself that the culprit must show remorse and atone for his crimes which stuns the forensics officer and Conan before making a thumbs up since the case is solved. The Detective Boys approve his statement and make also a thumbs up except for Haibara who just stares at him. He then laughs out just like Kogoro.

Misao met Kogoro from the case. He is a very big fan of him, to the point of fawning over him, acting as if he was Mouri's biggest fan, and often being the only one to approve and follow his more bizarre deductions. He considers that they are partners and that, when on a case together, they have a 100% chance to catch the criminal; however, Kogoro does not approve of the "partner" appellation.[14] Misao is very disappointed when he cannot film Kogoro during his "sleeping" form, musing that he wanted to show the other detectives at the Gunma Police Department.[15] However, when he finally does get to film Kogoro's sleeping deduction, he leaves the camera on pause during the whole deduction, showing off his carelessness.[14] He even cries heavily when he thinks that Kogoro has killed himself, not knowing that it was merely an imposter that looked like him.[15] However, this does not mean that Kogoro doesn't fall victim to Misao's bad deductions; the first time that Misao meets him, he announces that Kogoro is the killer without barely any evidence at all.[12] Although Kogoro does not like his detective skills, he considers Yamamura a friend on a purely personal level, especially when both detectives drink together.[15]

Misae Yamamura is Misao Yamamura's paternal grandmother. They are very close. She lives in the Tottori prefecture, and he often talks about calling or visiting her. They seem to have the same interests: she recommended a romantic drama to Misao which later captivated him.[16]

Yamamura's name comes from mystery writer Misa Yamamura. In the english Funimation Dub, his surname is a reference to detective series Magnum P.I.

His last name Yamamura (山村) translates as "mountain village". His first name Misao (ミサオ) may have the meaning "chastity, fidelity", but since it is written with purely phonetic Katakana, no definite meaning can be assigned to it.