Difference between revisions of "Makoto Kyogoku"

Makoto attended Haido High School, where he was a prominent member, and eventually the captain, of his karate team and became known as "The Prince of Kicks". He noticed Sonoko cheering on her friend Ran with great vigour during a martial arts tournament, and became interested in her.[3]

Some time later, he worked in his family's inn as a waiter, where he encountered Sonoko again, this time in company of Ran and Conan.[3] Soon, however, Sonoko was stalked by a crazed serial killer who suspected her of having taken a picture of him at his latest murder (which she hadn't) and therefore wanted to both silence her as a potential witness and kill her because he hated brunette girls in general. Makoto saved her just in the nick of time, earning her affection, but his constant participation in martial arts competitions and a studying period overseas prevented them from seeing each other often enough.[3] Sonoko always does her best to maintain contact with him, though, including sending him little trinkets and gifts that she makes herself, and Makoto has stayed loyal to her. He usually gets caught up in one of Sonoko's silly romantic schemes. His fighting skills have proven to be incredibly handy for Conan, having saved Conan, Sonoko, and Ran from being in dangerous peril many times.

As a master martial artist, Makoto is usually cool, calm and collected, especially in crisis situations, and also a keen observer. At times, he can also adopt a very intimidating aura, making him appear very fearsome. In the TV Original episode "The Mystery of the Vanished Black Belt", it is explained that he adopted these personality facets following an encounter with the renowned martial artist and teacher Tatsuhito Takami in his youth.

The only thing which does throw Makoto off is his affection for Sonoko, for whom he will go to great lengths, even forsake an important tournament just to meet her. However, Makoto's bashfulness around her, his dedication to his fighting skills and some competitive impulse keep him jumping from one obligation to the other, so their relationship is rendered a bit difficult. But at one point, Sonoko introduces Makoto to her parents, and they eventually approve of him.

Makoto's upbringing must have been rather conservative, since he doesn't quite approve (or at least expresses puzzlement about) Sonoko wearing modern, revealing clothes and therefore worries about her catching a cold whenever he sees her like this.

As a comic relief, Makoto always bears a plaster above his left brow as a mark for his fighting competitiveness.

Makoto is depicted as one of the most powerful teenage martial artists throughout the whole series. In reference to his incredible ability, he is nicknamed the "Prince of Kicks". He has acquired championships in some international Karate tournaments.[6][7] Makoto also had a 400 win streak from matches around the world that was broken only when he skipped a tournament to be introduced to Sonoko's parents and lost by default.[8]

Makoto's extraordinary might is carried over into real life combat against criminals carrying weapons and firearms.[9][10] As a show of his ability, Makoto was surrounded by 11 men armed with BB pistols. Despite wearing a gasmask that limited his field of view, he caught all the BBs they fired and knocked out all 11 men.[11] In another case, his unarmed combat skills send a huge group of gangsters armed with swords to the ground with no injuries suffered on his person, despite the latters' vastly superior numeric strength.[10] Even his kick alone can break the enemy's sword into two.[12] The people who have suffered from his attacks are usually depicted with severe injuries, such as bleeding or losing some teeth. Many often pass out or become unable to move.[12] 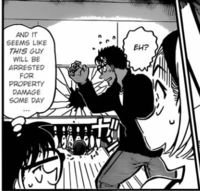 Makoto is shown to be able to throw a bowling ball all the way to the end of its lane (and smashing a hole into its headboard) when he tries to play bowling with Sonoko.[13] He has also been known to bring down a building pillar by repeatedly kicking and punching it,[14] and lift the tail of a van running at full speed to stop it from ramming a wall.[15]

Makoto is shown to have an astute mind due to his extensive training, being able to identify Kaitou Kid disguised as Sonoko because of a difference in finger lengths. This is possible because he can take full dimensions of a person he meets in moments. It is a habit of analyzing his opponents physical features with a glance.

As a skilled and well-trained martial artist, Makoto is fast and agile. His observational skills and quick reaction time enable him to dodge a bullet[9] and block sword slashes.[10]

Makoto seems completely immune to pain, dismissing a knife sticking in his arm as nothing too significant.[3]

Sonoko, Ran, and Conan are vacationing in Izu. Makoto is the son of the owner of the inn they all are staying at. After Sonoko is attacked, Makoto is suspected as one of the culprits but instead was following Sonoko in order to protect her. He ends up saving her from the real attacker at the climax of the case, just as Ran remembers seeing him at a karate match.

Sonoko messaged Makoto about making chocolate for someone that she likes. Makoto became jealous, and so hetraveled through a snowstorm just to see who Sonoko's lover was. He gets caught up in a murder case and is wrongly suspected, but manages to rescue Ran and Sonoko from being shot by the real culprits. Sonoko reveals that the one she made the chocolate for, and the one she likes, was Makoto all along.

Makoto was confused about Sonoko's letter and decided to camp in that forest until the day of the meeting comes.

Makoto won the competition for Sonoko's white day present. Although she was happy at first, at the end of the episode, she was seen asking Makoto whether he was planning to give anything else.

Makoto is learning tennis and hopes that he would be able to play with Sonoko someday. Upon seeing his video message, Sonoko immediately brings Ran, Kogoro, Conan and a special coach along to practise with her.

Makoto challenging Sera for a fight

Makoto mistook Sera as a guy flirting with Sonoko and tried to fight her. Sonoko did not interrupt their fight as she wanted to see it for herself. Later Makoto became the main suspect of the case. Inspector Yamamura even puts handcuffs on him.

Makoto managed to uncover Kid's disguise as Sonoko. Upon asking him, he blushed shyly and said that it was because Kid's ring finger is longer than his index finger, unlike Sonoko.

Not much is known about Makoto's family except for that Makoto's father owns the Kawaraya Inn that Conan, Ran, and Sonoko stayed at in Izu. During the summer, Makoto occasionally helps at the hotel and works as a waiter at the Nagisa Sea Shop restaurant located on the nearby beach.[3] In Sonoko's Red Handkerchief Makoto mentions that his younger sister requested that he tape "The Maple Leaves of Winter" for her.[16]

Sonoko originally met Makoto Kyogoku while vacationing, where he was a waiter at a restaurant and worked at his family's inn in his spare time. At first, neither she, Conan, nor Ran recognized him, because he wore glasses to hide his features. After he later protects her from getting killed by a crazed serial killer, Sonoko and Makoto entertain a long distance relationship while Makoto goes to study abroad, which is additionally hampered by the fact that he tends to be a little bashful around her.[3] 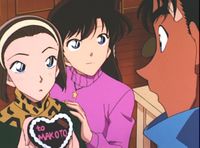 Sonoko presenting the chocolate she made to Makoto.

Makoto often saves Sonoko from dangerous peril, like in a snow lodge,[9] and in a forest.[10] Sonoko loves to use some kind of concocted scheme to get Makoto to come to her, usually in some romantic way, to create a romantic and dreamy experience for her.[10] This, however, doesn't always end in success, but he sometimes does stumble through her little schemes.[9][10] He often warns her of the way she is dressed, because he believes that guys will try to come after her because of it.[3][9] 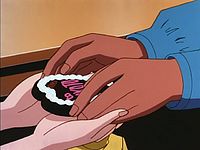 Sonoko gives the chocolate she made to Makoto.

Sonoko often wants to show Makoto that her feelings for him are stronger than he thinks, planning simple ideas to make him feel special. However, these often go in awry, as she either cannot make what she had planned to make, like when she promised to make him a home-made sweater, but had to resort to buying one in a mall,[17] or Makoto has no idea what she gave him is, like when he believed that the pottery she sent him was supposed to be for flowers.[18] Sonoko keeps a photo of Makoto in her bag, and uses it as a good luck charm for when she takes exams.[19] She has also made him a chocolate, trying to make him feel jealous by not saying who it was for, thus forcing him to visit her in a snow lodge to ask her what was going on.[9] When he finds out that indeed, she made him the chocolate, he gets very embarrassed himself.[9]

Although long distance relationships can be hard to be in, and despite her constant flirting with any other attractive boy she stumbles upon, Sonoko has generally stayed faithful to Makoto, other than dreaming of meeting up with the Kaitou Kid, though this is mostly to see him up close more than anything else. Makoto also stays faithful to Sonoko.