While sneaking around the school late at night searching for the answers to the final exam, Kaito Lupin stumbles across a list for "Illegally Accepted Students" for his school. To prevent a scandal from happening and to put Kaito in his place once and for all, Headmaster Tsubura teams up with the Gurikouji Financial Group's Kenzou Gurikouji. Gurikouji is currently being investigated by Aoko's father, Inspector Holmes, regarding the group's drug trafficking and gun smuggling. Tsubura and Gurikouji intend to trick Kaito's friend, Aoko Holmes, into believing Kaito might be expelled from school and blackmail her into marrying Gurikouji's son, Ken. By doing this, Gurikouji would gain control over police investigations and Tsubura would finally remove Lupin from the school. Aoko reluctantly agrees and it's up to Kaito to crash the wedding and steal her away somehow! 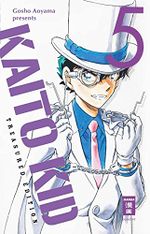