This man, who has not yet been named, commands Snake and a group of underlings. He is a subordinate of the boss of the Magic Kaito Organization. 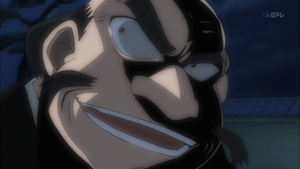 He is, so far, the closest man to the Magic Kaito Organization Boss. His first appearance is at the mansion hideout where Snake returned with the gem Blue Birthday. He reveals to Snake (and Kaito Kid who had been listening in) that the goal of the Organization is to find the jewel in which Pandora is hidden. Pandora is a legendary jewel which, if exposed to moonlight on the night a certain comet passes over, would drop a tear which grants immortality to whomever drinks it.

He commands his underlings to kill Kaito Kid, but has no weapon himself.