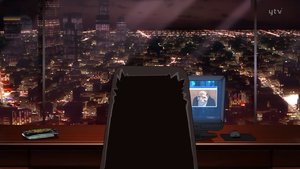 The highest ranking member of the Magic Kaito Organization after finishing a conversation with the sub-boss via video chat.

Almost nothing is known about this mysterious character. However, it must be stated that in the anime special the boss contacts the other members via chat and that he gives orders not in Japanese, but in English.