Difference between revisions of "Magic Kaito" 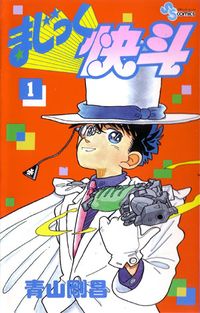 The cover of the first volume of Magic Kaito released on May 15, 1988.

Magic Kaito (まじっく快斗 ,Majikku Kaito?) is a shōnen manga series by Gosho Aoyama, about a thief named Kaitou Kid. Aoyama stopped work on the manga after three volumes due to the fact that he started Detective Conan, which was an instant hit. Chapters of the Magic Kaito manga have been released in Shōnen Sunday since then, and have only been collected into a forth and fifth volume in February 2007 and July 2017 respectively.

Kaito Kuroba, a normal teenage high school student, stumbles across the secret of his father's death: his father was not only a magician, but the famous phantom thief Kaitou Kid, and was killed by an organization for reasons unknown. Taking up his father's mantle in an attempt to bait the killers, Kaito performs a number of thefts and eventually learns that his father died for interfering in the organization's quest to find the Pandora Gem. Pandora is said to glow in the light of the moon, and beneath the moon and a certain comet, will shed a tear granting immortality to whomever drinks it. Kaito then decides to search for Pandora as Kaitou Kid and destroy it, in order to prevent the organization from obtaining their goals.

There are also many other characters who seek to interfere with Kid heists. Inspector Ginzo Nakamori, the head of the Kid taskforce, is responsible for capturing and unmasking Kaitou Kid to bringing him to justice. His daughter Aoko Nakamori, Kaito's love interest and classmate, wishes to unmask Kid herself so that her father would not have to work as hard. Akako Koizumi, a witch and classmate, uses real magic to try to steal Kaito's heart. Saguru Hakuba, a high school detective from Britain and classmate, try's to unmask Kid through direct challenge. Later on both Akako and Saguru aid Kaito by giving him hints and warnings before heists to prevent him from being caught so they can catch him themselves.

You can also view this list as Magic Kaito Manga Listed By Heist.

Chapters not yet included in a Volume[edit]

Main article: Magic Kaito Chapters not yet included in a Volume

In celebration of Detective Conan's 20th manga anniversary Shonen Sunday announced a new anime adaptation of the Magic Kaito manga. It began being broadcast October 4, 2014 and it was animated by A-1 Pictures and it was stated that it will be a "completely new work". The show's official website is http://www.ytv.co.jp/magickaito/. The production company's website for the series is http://a1p.jp/works/magickaito/. 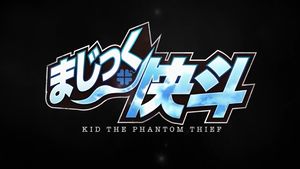 The manga was first adapted into a series of TV specials titled Magic Kaito: Kid the Phantom Thief (まじっく快斗: KID THE PHANTOM THIEF ,Majikku Kaito: Kid the Phantom Thief?). It's debut episode aired on April 17, 2010 on Animax before reairing on Nippon Television Network a few days later. The remainder of episodes aired between August and December of the following two years.