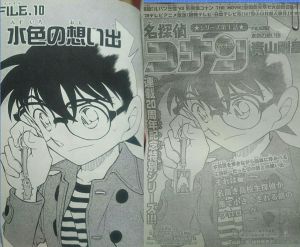 For the Volume version the phone strap was changed to Ran's original sea cucumber strap, based on Namako-Otoko from Yaiba

Kir's grip while checking Conan's pulse for lying was changed. In the volume version, Kir checked Conan's neck for abnormal pulse rather than his shoulder.

In the Ikkaku Rock Case, the culprit's band-aid is missing from one of the panels. Even worse is that it is a clue because the victim's lipstick is supposed to be under it. This was later fixed in the subsequent volume release.

In the Sunday version, the photo on Conan's phone showed a different expression on Mary's face then the one she had when Conan originally took the photo in the previous chapter. The fixed version depicts the correct expression.

When originally released, for both File 966 and 967, Gosho placed one of the X's in the table in the wrong row. This one is particularly amusing because Gosho was saying in the Animal Crossing promotional hints that "The code can be solved with just the 1st chapter." It was noticed and corrected for the release of File 968 and then later fixed for the other two chapters in the volume version.

Due to the original drawing looking a bit young, it made it a bit more difficult to recognize the character definitively as Shukichi
(Left: Scanlation version, Right: Volume version)