Difference between revisions of "Konosuke Jii"

Konosuke Jii (寺井 黄之助 ,Jii Kōnosuke?) is a character in the manga franchise Magic Kaito, as well as the manga and anime franchise Detective Conan.

Jii worked as the famous magician Toichi Kuroba's assistant. He also knew of Toichi's alter ego as the Kaitou Kid, and presumably assisted him in his heists. According to Jii, Toichi made him swear never to tell his son Kaito about his father's secret identity. Because Kaito did not immediately recognize Jii, it seems that he may not have been close to the entire Kuroba family, or perhaps Toichi wanted to protect Kaito from his Kaitou Kid identity, and thus kept him away from Jii.

Jii appears to be deeply loyal to the Kuroba family, always willing to assist both Toichi and Kaito's activities as Kaitou Kid. Though he is not as outgoing as either of his employers, he is brave enough to take on many high-risk assignments with little hesitation.

When not assisting on heists, Jii's interests seem to include billiards and classic art (as evidenced by his interest in the Paris Collection). 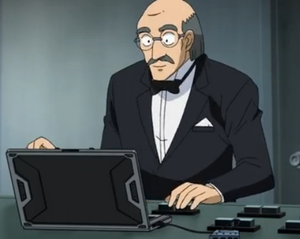 Jii has some skill with hacking control systems.

A former magician's assistant, Jii is quite knowledgeable about magic. Jii currently assists Kaito Kuroba on heists, and likely assisted Toichi Kuroba in the past. Jii does at least some of the scouting and preparation needed to develop tricks for heists, and occasionally helps in the tricks themselves during the main event. He is also a swift and skilled but reckless driver who weaves in and out of traffic. The police are aware that Kaito Kid has assistances. Nakamori mentions that the description are a young woman or an old man. The old man is clearly Jii, while the young woman could be Kaito Kid in disguise or Akako.

Jii first appears in the opening file of Magic Kaito, where he dresses as the Kaitou Kid and steals a diamond using a magic trick that makes most of his body disappear. After Kaito stumbles through the trap door to his father's Kaitou Kid room and realizes that his father was the original Kid who disappeared eight years ago, he decides to dress as the Kid and discover the identity of the current Kaitou Kid.

Kaito confronts Jii on the top of a building and manages to see through Jii's disappearing trick. Jii mistakes Kaito for his father, then Kaito recognizes Jii from tapes of his father's magic shows. Jii tells Kaito that Toichi was murdered eight years ago, and that he, Jii, had donned the costume in an attempt to lure out the murderers. Kaito immediately decides to become the Kid, to Jii's seeming dismay, but Jii's advanced age make it clear that Kaito has a better chance of successfully pulling off heists than Jii does.[4]

Since then, Jii has appeared to offer Kaito advice and sometimes assist him in his heists. It was implied that the Kid's 'assistant' in the Magical Midair Walk[5] and in the Teleportation Heist[6] was Jii himself.

His youth was during World War II, in 1945. He was hired by Koyata Yamamoto, a businessman who bought the 'Ashiya Sunflowers', as a servant in his Ashiya household, and even then wore glasses. His first love was Umeno, the young housekeeper, but she was secretly in love with Kiyosuke Azuma, hired by Yamamoto as a carpenter, although he was married and had a son. He had never hated Azuma and they were good friends. The whole city was engulfed in flames on the day of the air strike. In order to save the painting, who embedded it in the wall firmly to prevent theft, Azuma ran back inside the building mansion. Amid the blazing flames sparked by the raid, Umeno and Jii were entrusted that painting by him, as they witnessed his final moments before their very eyes, and Jii saved her from that fire. To avoid confiscation by the Allied Forces, it was passed off as a fake and sent to Europe, where was sitting quietly in the attic of an old house in Arles. Helped by his words, a year before, Koichi and Koji, Azuma's twin grandsons, finally found it after years of searching. During Jirokichi Suzuki's exhibition, disguised as Zengo Goto, he happy cries seeing on the monitor Umeno moved reviewing the painting. Now finally 'Ashiya Sunflowers' safely returned to Japan, and the people of the world will be able to gaze at it just like in an art museum that Saneatsu Mushanokoji spoke of, Azuma and his son's wish has been granted.

Like with Toichi, Jii is loyal to Kaito, and helps out with his heists. 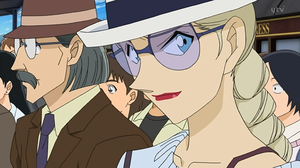