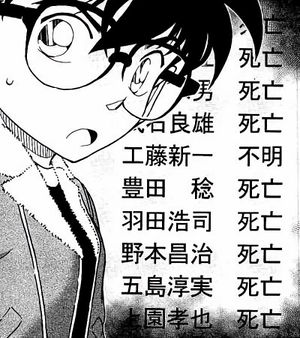 Kohji Haneda was a talented shogi player that his "not-related-by-blood"[2] brother, Shukichi Haneda, deeply respected. By the time of his death he had won four shogi titles. Many had high hopes that Kohji would win all seven of the major shogi titles.

Seventeen years ago, he died under mysterious circumstances when in the United States participating in a chess tournament, a game he also enjoyed. Ai Haibara suggests that Kohji may have been murdered with APTX 4869 since a person with the same name appeared on the list of people killed by the poison. It has been discovered that Rum may have been involved with his death due to the dying message missing letters that could be arranged to spell "ASACA RUM".

Kohji's motto was "one should stick with one's original plan" (初志貫徹 ,shoshi kantetsu?)[3]. The same motto was written on a fan that Shukichi now owns.

Haibara remembers a list of people that the drug APTX 4869 was used on in the past. She says that all of the other APTX 4869 victims were confirmed dead, except Shinichi. On that list was a name, Kohji Haneda (羽田 浩司 ?), which was not relevant to the readers at the time. 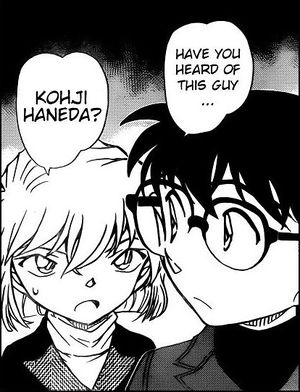 Conan investigates on the internet and finds that someone has been uploading information on Kohji's death. Kohji went to the United States to participate in a chess tournament seventeen years ago. The night before the tournament, he was attacked by someone and died at a hotel where he stayed. The room was ransacked, and he resisted. The cause of death is unknown. On the same day and at the same hotel as him, a wealthy person named Amanda Hughes died as well. She was a big fan of Kohji. Unlike Kohji's room, Amanda's room was clean when she died. Amanda's bodyguard, Asaka, went missing and still can't be found. Agasa reveals that a similar murder has happened recently so they put the investigation on hold. After Conan and Subaru solve that case, they decipher the meaning of the missing letters on the mirror of Kohji's room. Kohji's dying message from 17 years ago was "ASACA RUM", so Rum may be involved in their deaths.

Since the dying message was "P T O N", the answer to it must contain all of the missing letters of "U MASCARA"
PUT ON MASCARA - P T ON = U MASCARA
U MASCARA - ASACA (for Asaka) = U M R
Which can be rearranged to make RUM
making the answer "ASACA RUM"

Kogoro is put in contact with a Soul Detective who wishes to reveal some information about the Kohji Haneda case. When Conan and Kogoro go to meet with him at a hotel they find him dead and that Masumi and Mary have mysteriously moved in to the next hotel room. Both Masumi and Mary seem to react to Kohji's name when Kogoro says it.

The superintendent Hyoue Kuroda is shown looking at the article about Kohji's death and drawing a relation between Rumi Wakasa and Kohji.

Yusaku Kudo interprets Koji Haneda's dying message differently. He thinks "RUM" and "ASACA" form one single name: "CARASUMA". There is a connection between Renya Karasuma and the organization.

Shukichi is a non-blood brother of Kohji, either by adoption, marriage, or some other means. Shukichi deeply respected him and likely changed one of his name characters slightly to honor Kohji. However the story of their relation is unknown. It's possible it's related to Tsutomi's involment in Kohji's death.

A relationship between Kohji and Shuichi Akai is unknown, but the case of Kohji's death made Shuichi an FBI agent.[4]

Amanda Hughes was a fan of Kohji and has been in contact with him. She was murdered the same day as Kohji, and evidences proves that she had been in his hotel room before the murder. Haibara suspects that it might have been their relationship that led to Kohji's death.

It's hinted that there is a connection between her and the murders of Kohji and Amanda.

It's hinted that Kuroda might have been involved in the death of Kohji 17 years ago, as he was shown very pensive, looking at Kohji's death in an article.

Shukichi Haneda (羽田 秀𠮷 ,Haneda Shūkichi?) may have changed his name slightly to honor the late Kohji Haneda. Kohji's given name is 浩司, and the first character's radicals are (氵 ノ 土 口). 土 is earth's do. Shukichi's given name is spelled 秀𠮷, with the final "kichi" kanji also including the radical for earth's do. This 𠮷 for kichi is a very rare variant; 99% of the time kichi is written as 吉 with 士 (man/samurai's shi) instead.