Difference between revisions of "Kogoro Mouri"

Kogoro Mouri (毛利 小五郎 ,Mōri Kogorō?) is one of the main characters of the manga and anime. He is a private detective and the father of Ran Mouri.

Kogoro is a private investigator,[3] but he prefers to laze around all day. Kogoro attended Teitan High School, the same high school as Ran Mouri and Shinichi Kudo, along with Eri Kisaki, Yukiko Fujimine, and the actress Ruri Ujo.[4] He then graduated from Beika University, where he was the ace of the Judo team, though he was highly vulnerable to stage fright.[5]

Some time after graduating, Kogoro became a police officer. He worked in the Tokyo Metropolitan Police Division One under Inspector Megure, but he did poorly at his job. He also worked for some time under Inspector Yuminaga in the arson division as well. While Movie 2 strongly suggests that Kogoro left the police force because of the incident where he shot at Eri Kisaki who was held as a hostage, his reasons for leaving the force have not been confirmed in the manga. Kogoro is an excellent marksman.[6]

Kogoro's daughter, Ran Mouri, is also the daughter of Eri Kisaki, who is now living separately after an argument ten years prior.[6] Despite constantly feigning disinterest in her, Kogoro still has feelings for his wife—he has even asked her to move back in with him, but she pretends not to hear him because she is not "ready" yet,[7] though she still has feelings for him as well. These are expressed mainly through jealousy when Kogoro's attention is caught by other attractive women in the vicinity.

After Shinichi had been shrunk by an accidental effect of a mysterious poison and was forced to adopt the identity of Conan Edogawa, Hiroshi Agasa concluded that Shinichi couldn't openly continue any investigation without attracting undue attention by the Black Organization. To maintain his cover, he suggested Shinichi to move in with Kogoro and use him as a front. When Kogoro's conclusions during one of their first investigations became so dilettantish that the cause became hopeless, Conan used his soccer skills to kick an ashtray to knock him out. Kogoro unconsciously (and conveniently) adopted a reclining pose, and Conan used his Voice Changer, imitating Kogoro's voice, to present his conclusions and the identity of the true murderer; this earned Kogoro the title "Sleeping Kogoro" and the reputation as a master detective. (Later, Conan would employ his Stun-Gun Wristwatch to knock out Kogoro instead.)[8] In the few instances where Kogoro remains awake for some reason, Conan still does the main detective work and uses Kogoro as his official mouth-piece by drawing the latter's attentions to important clues he has uncovered.

Kogoro in the morning.

Kogoro spends most of his time being dysfunctional and entirely unprofessional. Most often it is Ran, but occasionally Eri, who takes responsibility for straightening him out and reminding him who really has the power in the family.

Kogoro has an overinflated sense of his own importance and detective prowess to the point where he doesn't question why he is suddenly passing out at crime scenes and solving cases in his sleep with entirely different deductions than he was making in his waking state. Furthermore Kogoro is not diplomatic, frequently making sarcastic and blunt comments about suspects or even his own clients. Kogoro is also headstrong and irritable, but especially so when Eri is involved.

On cases, Kogoro is lax with his deductions and investigation; usually missing all but the most obvious clues. He often jumps to silly conclusions, changes his mind, and falls into whatever logical traps the culprit has prepared. The police, especially Megure, usually find him to be an embarrassment and they hope he goes into sleeping mode as soon as possible.

Kogoro does have a serious side which only emerges when the case has personal importance to him, such as when Eri and Ran are involved. When this happens, Kogoro's entire personality and demeanor changes for the serious, and he begins acting professionally, demonstrating improved deductive skills and cunning. While he is not up to the standards of Shinichi and he still has problems with finding clues, his logical reasoning becomes better, and Kogoro often demonstrates he has a better sense of interpersonal relationships than Shinichi does. 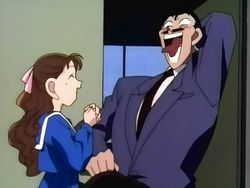 Kogoro easily becomes infatuated with beautiful women. His dream woman is pop idol Yoko Okino, and he never misses (or tries not to miss) her television shows.[9][10] He also keeps a massive collection of Yoko related goods and his office and bedroom have Yoko posters. Because of his flirtatious behavior around attractive women, he often embarrasses his daughter Ran Mouri, and while it is not the reason why his wife left him, it is the reason why she hasn't come back.

While he is never outright called an alcoholic, Kogoro has a tendency to get intoxicated at social events, and Shinichi/Conan makes sarcastic remarks about him spending money on alcohol. In the anime, his office is littered with empty beer cans,[11] and he keeps a well-stocked liquor shelf. Kogoro is also a heavy smoker, and is usually seen with a cigarette in his mouth. His hobbies include mahjong and gambling on horse racing and keirin.

In the Japanese version, due to his name Kogoro Mouri he is often mistaken for the famous astronaut Mamoru Mohri when he introduces himself, because they both are in the news frequently, of Japanese decent, and have the same last name. In the English version when Kogoro introduces himself he is often mistaken for "oh, that famous astronaut," as well. In the English version it is possible he is also confused with Patrick Moore.

In the US version, Kogoro Mouri says that he is forty-three, in opposed to being thirty-seven in the Japanese version. It is unknown if Eri's age remains the same since they had attended school together, and if not, if it will affect the Princess Pageant storyline that occurred twenty years ago, making her in her twenties when she participated instead of a teenager.

Kogoro suffers from a mild acrophobia (fear of heights) and is quite uncomfortable in high settings, such as skyscrapers, when he has the chance to see how high up he is. It has also been made clear that Kogoro is an expert with a handgun, being able to hit targets at great distance with an impressive level of accuracy. He is also known for his Judo throw, which he often uses to incapacitate escaping suspects. As for leisure activities, unless he drinks to excess or goes hunting for any recordings of his favorite idol star, Yoko Okino, he enjoys betting on horse races, mahjong (which he tend to lose) and baseball (he even plays in his neighborhood's team).

Kogoro is an average sized man. He has slicked back, short black hair with two loose locks hanging across his forehead and a short mustache. Ten years ago when Kogoro was still on the police force, he was clean shaven.[12] While on cases, Kogoro usually wears a muted blue or grey suit and necktie, and just a collared shirt when being more casual. If he has been drinking heavily, he often ties his necktie around his forehead like a bandana. He seems to be reasonably fit, as he is capable of doing an Ippon seoi-nage. Kogoro is right handed.[13] Kogoro also smokes, although over the course of Detective Conan's run he has gradually been depicted smoking less often.

Throughout most of the series, Kogoro is depicted as a pretty incompetent detective, often missing obvious clues and jumping to the wrong conclusions, though several of these conclusions were shared by other people on the scene. However, Kogoro does follow the proper police procedures, asks questions, and (with a little help from Conan) follows leads quite well. Despite his ineptness, he had been a prominent police officer under Inspector Megure ten years prior to the start of the series[6] He is shown to have left the police force after events addressed in the second movie, The Fourteenth Target.[6]

Thanks to Conan's undercover help in solving numerous cases, Kogoro's reputation as a detective grows quickly.[14] He hardly remembers the solutions of any cases because Conan knocks him out with tranquillizer darts so that he can announce the solution to the case while hidden, using a device that allows him to imitate Kogoro's voice as a proxy. However, Kogoro never seems to wonder about this fact and often boasts about his merits. Because of this, he has become nicknamed the Sleeping Kogoro (眠りの小五郎 ,Nemuri no Kogorou?). Jugo Yokomizo often mistakenly calls him Smoking Kogoro (煙の小五郎 ,Kemuri no Kogorou?) because of his heavy smoking habits. Because of his (or rather, Conan's) tendency to coincidentally come across a crime scene, Inspector Megure is often referred to Kogoro as a shinigami (death god).

In later stories, there are times when Kogoro is actually able to solve crime cases without (or little) help from Conan, especially when people he knows or cares about are involved; it appears that, while he can connect the dots just fine, he can't actually find them as quickly as Conan does. The first of these events takes place during a trip to a hot spring, where one of his old college friends is murdered. Kogoro is actually so disturbed and determined to find the killer on his own that Conan cannot bring himself to drug him, limiting himself to surreptitiously drawing attention to the necessary clues.[15]

Despite his frequent moronic analyses, Kogoro is actually pretty smart when he applies himself. He is even able to completely solve a crime on his own in the ninth movie, Strategy Above the Depths, due to the fact that the culprit Minako resembles Eri, and Conan applauds him mentally for his success. (For a more detailed list of the cases he has - more or less - solved on his own, see List of cases solved by Kogoro Mouri).

Kogoro was on the Judo team while he was at Beika University. Although he was the strongest on the team and can and still does toss large men with ease, he lost all the time at tournaments because he got excited and his strength was used against him. His trademark is the Ippon seoi-nage (one arm shoulder throw). He appears to also be a capable teacher in the art, having taught both Eri and Ran.

In the non-canon Movie 2, Kogoro was an excellent shot with a handgun.

Kogoro earned the news nickname Sleeping Kogoro (眠りの小五郎 ,Nemuri no Kogorou?) because of his trademark technique of solving cases while looking like he is asleep. Many characters unfamiliar with him call him by this nickname when they realize who the detective is.

Black Impact! The Moment the Black Organization Reaches Out! 499-504