Difference between revisions of "Kazuha Toyama"

Kazuha Toyama (遠山 和葉 ,Tōyama Kazuha?), also known as Kirsten Thomas in the Funimation dub, is character in the manga and anime Detective Conan. She is a childhood friend and the romantic interest of Heiji Hattori. 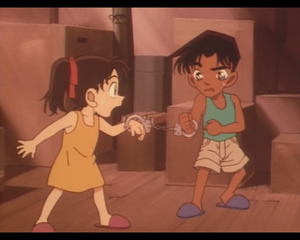 Heiji and Kazuha cuffed together as children

Kazuha and Heiji Hattori have been close friends since childhood. Their fathers work together at the Osaka Police station, where Kazuha's father, Ginshiro Toyama is a subordinate and close friend of Heiji's father, Police Chief Heizo Hattori. Her mother is mentioned in episode 573, where she wanted Heiji to bring Kazuha her drinkbottle.

At one time in their youth, Heiji had had the unfortunate idea of locking themselves together with a set of old handcuffs which had no key to unlock it; as a result they involuntarily had to spend time together even on some rather intimate occasions (i.e., bathroom visits) before the cuffs could be removed. As a reminder of this 'closeness' and for good luck, Kazuha fashioned two identical lucky charms, each incorporating a chain link from the cuffs, which she and Heiji have been wearing ever since.[3] At some later point, Kazuha added a picture of Heiji into her own charm pouch.[4]

After Heiji had met Conan and discovered his true identity, he talked about him so frequently and enthusiastically to Kazuha that she became convinced that Heiji was in love with a Tokyo girl named 'Kudo.' When Heiji invited Conan, Ran and Kogoro to Osaka, Kazuha spied on them, believing Ran to be 'Kudo.' At an okonomiyaki restaurant, when Heiji got up for a moment, Kazuha sat down in his seat and warned Ran to back off him, at which point Heiji returned, the misunderstanding was cleared up, and Heiji laughed at Kazuha's behavior.[5] In their next meeting, Kazuha continued to treat Ran coldly, pointing out that Ran and Heiji's clothes had coincidentally matched the last few times they had been together. In response, Ran immediately changed clothes, after which point the girls became much friendlier.[6]

Kazuha has a hot temper and can be highly critical of people around her. She has been hinted to have a high level of intelligence, as she was able to deduce a dying message in an episode even more quickly than either Ran or Kogoro could (albeit with slight help from Heiji). Moreover, she is highly confrontational, and unafraid of letting others know about her dislike, even showing no hesitation or concern in confronting Heiji in a men's restroom. This trait leads to frequent shouting matches with Heiji, but it also allowed her and Ran to forge a strong friendship despite the fact that Kazuha, believing that Ran was Heiji's new girlfriend, took an initial deep dislike to Ran out of jealousy. Affection and approval are apparently much harder for her to express, most significantly with regard to Heiji; she is perfectly aware of her feelings for him and, after a few initial attempts to deny it to Ran, openly discusses her love for Heiji with her. However, even when a good opening appears to discuss her feelings with him, she instead panics and does her best to pretend that she and Heiji are 'only friends'. Although she has tried and failed to confess to Heiji twice already, Kazuha is determined to make her feelings clear to him one day.

She also has a marked belief in spirits, good-luck charms, and other superstitions. Right from her first experience, she displayed her belief in the importance of hers and Heiji's omamori, charms which Kazuha made to protect her and Heiji from harm. And indeed, during the case in which this is revealed, Heiji lent Conan his omamori, and the metal inside the charm stopped a knife blade that could have killed Conan.[5] On subsequent cases, Kazuha is quick to attribute mysterious shadows and strange events to ghosts and other malignant spirits, which usually sends Ran into panic as well, though she herself does not possess a morbid fear of ghosts as much as Ran does.

Kazuha has dark brown hair which she keeps up as a neck-length pony tail, and often uses ribbons of different colors (mostly yellow or orange) to secure her hair. She also has green eyes, fair skin, and a fairly slim and curvaceous build, not unlike Ran herself. Kazuha's way of dressing ranges from shirt and jeans to (though rarely) dresses.

Despite her fearfulness, Kazuha is also a 2-dan in aikido, and has exhibited her skills in taking down several criminals, including Ki'ichiro Numabuchi.[5] Kazuha also seems to be more intelligent than Ran, as shown in Episode Which One's Deduction Show when Heiji gave a clue about the code which Kazuha understood while Ran couldn't.

Soon after Heiji made Conan/Shinichi's acquaintance, he invited Kogoro, Ran and Conan to Osaka. Several times throughout the day Ran felt herself being watched by a pair of malevolent eyes. At lunchtime that day, a girl sat down and, to Conan's horror and Ran's bafflement, addressed Ran as "Kudo." She warned "Kudo" to stay away from Heiji, who soon returned and sets her right. Heiji introduced her as his childhood friend Kazuha and introduced Ran as Kudo's girlfriend- which Ran hotly denied -, whereupon Ran asked them if they are together, which Kazuha and Heiji hotly denied in turn.

She was almost killed by the Spider Mansion murderer because she found a BB gun bullet that the criminal had used in his setup; only Heiji's arrival chased the murderer away before Kazuha was strangled.

Heiji nearly fell off a cliff during his investigation. Kazuha saved him, but overbalanced and fell off the cliff herself. Heiji jumped after her, managing to grab her wrist with his left hand and a jutting branch with his right. However, the branch began to bend, so Kazuha stabbed Heiji's hand in an attempt to make him let her go and save himself. Despite the wound, Heiji did not let go, and managed to save the both of them.

Heiji still bears the scar on his left hand, and has been known to mock Kazuha about it.

Heiji and Kazuha were kidnapped by a corrupt lawyer in an attempt to force Heiji to crack a code. When he wouldn't comply, the lawyer decided to kill them both. Heiji asked to be allowed to say a few last words to Kazuha, claiming he had to tell her something he had wanted to say for a long time. This, it turned out, was a ploy to distract the lawyer, but when it failed, Heiji, with a gun to his head, told Kazuha that "I meant it when I said my last words were for you" and promised, if they survived, to tell them to her "until you're sick of hearing it." Afterward, when she asked him what he was going to say, he panicked and insisted that he had wanted to tell her that her ponytail had been tickling him while they were handcuffed together - which earned him an enraged slap in the face.

Kazuha saves Conan from Heiji's jealous rage, which she unknowingly caused by flirting with another man.

Heiji's relationship with Kazuha is a very close one; they were childhood friends, and have stayed close through the years. Their relationship is identified as a romantic one by other characters and fans alike, even though they claim that they don't have that sort of relationship or feelings for each other. Heiji is clueless when it comes to love and has not yet realized he has actual feelings for Kazuha. However, it has been shown that he becomes visibly jealous when he sees Kazuha with other guys, becoming distracted throughout the whole case. At one point, after a certain case, while looking at Kazuha, his thoughts read: "Fool. You're too naive. I promise you, as long as you're with me, I'll never let anyone hurt you." Kazuha knows she has feelings for Heiji, as she shows this by being protective and chasing off other women that might have an interest in him. In on of the mangas, Kazuha attempts to confess her feelings after finding out that Shinichi had done so with Ran (in the Holmes' Revelation Arc), but is unlucky because on hearing that, Heiji ran off to tease Shinichi/Conan for it. She once even attempted to sacrifice herself to save Heiji during a case in which they accidentally both fell off a cliff (episodes named And Then There Were No Mermaids). When the branch they were both hanging on started breaking, she stabbed him in his hand with an arrow of love, to force him to let her fall; however, Heiji still held on, saying that he will not let go of her, and managed to pull both of them to safety. Also, they have the same situation as Ran and Shinichi, being childhood friends that have romantic feelings for each other and have the same background as them. Heiji is a teenage detective and she is a police's daughter, like Ran is a police's daughter and Shinichi is a teenage detective. They are even called the 'Ran and Shinichi of Osaka' by fans of the series, since they're so similar. Although they are constantly fighting, they both are very close friends. It is also shown in the seventh movie, Crossroad in the Ancient Capital, that Kazuha is Heiji's first love, though he didn't know it was her at the time. In OVA 9, Heiji and Kazuha have been shown to be a famous couple, who are close to marriage. However, all this was just a feverish hallucination of Conan's.

Despite having rather different temperaments and personalities, Kazuha and Ran have several things in common, including: proficiency in a martial art, father's connection to police work and detective work, and detective-obsessed childhood love interests. Kazuha was initially cold and rude to Ran, suspecting her of being interested in Heiji. However, thanks to Kazuha's frankness and Ran's accommodating nature, the girls quickly overcame this misunderstanding. They have since become close friends and seem to regard each other as confidantes, since they are in similar romantic situations: Ran and Shinichi cannot confess their feelings for each other, as Shinichi is, aside from telephone calls, physically absent from her life, and Kazuha and Heiji cannot confess their feelings for each other due to their own stubbornness and irascibility. While Conan/Shinichi and Heiji are on cases together, Ran and Kazuha almost always spend the time together. When Kazuha visits the Mouris' in Tokyo with Heiji, she is shown to share Ran's bed.

The name 'Toyama' comes from Edo period "police detective" Kagetomo Toyama, aka Toyama no Kin-san, while Kazuha comes from one of Gosho Aoyama's assistants.