Difference between revisions of "Kanenori Wakita" 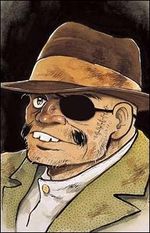 Danpei Tangei from Ashita no Joe. The hat obscures his baldness.