Kamen Yaiba is a fictional character in the series and a superhero that often appears on TV as a kids' show. Many relics have been made about him as publicity and marketing, including trading cards, posters, DVDs, and figurines. He is most liked by elementary schoolers like Conan and the Detective Boys, and many movies of the franchise have been produced. The plot is about a hero wanting to save the world from the threat of Jocker, an evil organization of alien monsters, and to conquer a young lady who is his first love. On the way to defeat his arch-enemy, the Jocker's boss, Yaiba also has to fight other villains that come in the way.

Kamen Yaiba is Satoshi[1], a normal young and good looking person who's always in the park with his childhood friend Rei Natsume selling hot dogs. But if something happens, he immediately drives to the scene and begin to battle the evil people or aliens. But, Rei does not know that he really is Kamen Yaiba. She only knows that her boyfriend often finds excuses to stop work, and ride away somewhere on his motorcycle. But every time, Rei forgives Kamen Yaiba with forgiving eyes. When the author was planning the story for Kamen Yaiba he made a scenario where his younger sister got killed. But, Kamen Yaiba doesn't fight for vengeance. He fights to maintain justice.[2]

The original Kamen Yaiba's arch-enemy was the Potato Baron, the fiends' leader under the Potato Queen.

Kamen Yaiba is one of the most viewed shows in Japan in the series world and is produced by Nichiuri TV, based in Tokyo. The show's episodes sytem is based on the series one with episodes and seasons. It has a wide range of TV producers and ADs having two main actors: the one acting Kamen Yaiba and the one acting as Yaiba's girlfriend. The costume designs company used is Kitagawa Costumes and Nakamura Clothing Store. The show disposes of a wide range of animated presentations to children, most often in parks and public areas like the Yokohama Red Brick Warehouse. The lighting and illumination is done by Ken Abe, Eizo Mizuguchi, and Nao Omura. The recording staff team is made by Emiko Akahori and Kenji Matoyama. The visual effects team has only two members: Masahiko Abe and Masahiro Isobe. The show has also been cooperated with Tohto University's Tama Campus, a visual arts department of the fictitious university, Iwakuma Sightseeing, a tourism agency promoting the show, Koyama Buses, bus transports for the staff, and Nagasaka's Everyone Kindergarten, as a promoter for children's shows.[3] The show appears in a weekly basis and mainly targets a young audience range, although some fans are really older. TWO-MIX sang the theme song. 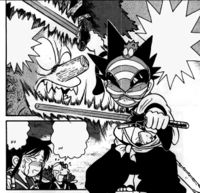 The name Kamen Yaiba is a combination of a parody of the Tokusatsu TV show Kamen Rider, as well as Gosho Aoyama's previous manga and anime Yaiba, referencing a moment from chapter 184, when Yaiba Kurogane put on Sayaka Mine's underwear like a mask to protect himself from the attacks of the Cedar Pollen Soldier, resembling the Rider a bit and jokingly calling himself "Kamen Yaiba" because of this. That franchise itself has had screenplays done by Toshiki Inoue. Several Detective Conan actors have appeared on Kamen Rider, including: Tori Matsuzaka, Seizo Kato, Rikiya Koyama, and Takanori Jinnai.