Jumbo (ジャンボ ,Janbo?) is a character in the anime and manga franchise Detective Conan. 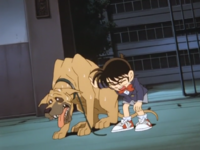