Difference between revisions of "Jirokichi Suzuki"

Jirokichi Suzuki is Sonoko's uncle and a general adviser for her father's corporation, although he is semi-retired and currently executes this function mostly as a pastime. He also has accumulated considerable wealth in his lifetime.[3] He is old enough to remember World War II, on one occasion mentioning that the vault in his current home was used as an air-raid shelter during his youth.

As an adult, Jirokichi is both adventurous and glory-hounding. Even at his considerable age he has risen to a number of extreme challenges, earning himself recognition and a constant place on the front pages of the Japanese newspapers. However, at one time a daring exploit by Kaitou Kid had inadvertently stripped him of his 'rank', and as a result Jirokichi declared a personal vendetta on Kid. Now he uses his considerable wealth to purchase rare and legendary gemstones and jewels for use as a bait for Kid, and to design ingenious traps to catch the master thief in the act.[4]

However, as the unpredictable rascal Kid is, none of the traps are able to hold him, and so far only Conan has succeeded in preventing Kid from taking away the loot as well. Now that Conan has taken Jirokichi's place on the front pages as the 'Kid Killer', Jirokichi feels jealous about him as well, although he has also come to respect Conan's superior detective skills and intellect.[4][5] 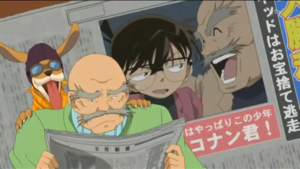 Jirokichi being depressed about once again getting outdone by Conan.

Jirokichi Suzuki is well beyond his 70s, but still physically and mentally in his prime. He is also an obsessive glory hound and adventurer who does not shrink from any challenge. His current life project is to capture Kaitou Kid, partly because of his personal vendetta against the master thief (see Background). But while he resents anyone who outdoes him, he entertains a silent respect for anyone who shows talents superior to his own, a fact which he has demonstrated to both Conan and Kid, his personal 'competitors'.

Jirokichi's closest companion is his dog Lupin, who is his best friend, bodyguard, and safekeeper in one person (or hound).

Jirokichi Suzuki decided he was going to be rivals with Kaitou Kid when one of the thief's exploits pushed the newspaper article of Jirokichi's man-powered solo plane ride around the world to third story.[8] Jirokichi anticipates that outsmarting and capturing Kaitou Kid will be the pinnacle of his many accomplishments to date and the jewel the autobiographical movie he plans to make. Jirokichi often buys large gems with interesting histories that are favored by the thief, displays them in some sort of unusual location or trap, and then challenges Kaitou Kid to steal them. Kaitou Kid thinks of Jirokichi as a fool that is easy to take from, but their relationship is amicable enough that Kid was willing to respond to Jirokichi's request for assistance once. To make it more difficult for the thief succeed, Jirokichi has invited Kogoro Mouri or Conan to help him several times. Conan has stopped Kaitou Kid from taking the jewel on several occasions and made the front page of the papers, but since Conan or someone else is the star of the article, Jirokichi is never satisfied.

Jirokichi and Nakamori sometimes work together to capture Kaitou Kid. Nakamori thinks Jirokichi is kind of crazy of baiting Kid with his own treasure and tried to be a star on a newspaper article.