After Conan reveals his insight, Heiji believes Conan is actually Shinichi Kudo. Heiji reveals that when Kanaya was in the car, his body had already undergone rigor mortis. At that moment, Conan and Heiji realize who the murderer is. Heiji decides to wait for Conan to solve the case in order to see if he really is Shinichi. Conan tranquilizes Heiji and makes his deduction.

Show spoilers »
Conan accuses Kento Togano, claiming he placed Hiroyuki in the car after murdering him. Kento, then placed Hiroyuki's foot on the brake and once rigor mortis had set in, turned on the car's heater, shifted the car into drive, and opened the garage. The heat caused Hiroyuki's body to leave rigor mortis quicker than usual, easing pressure on the brake and causing the car to accelerate into the ocean. The corpse had to be thrown down the cliff so the time of death wouldn't be found out. For Ayako's murder, Kento told Ayako the book was hidden in a car in the garage. The car had a punctured gas tank and the batteries were dead. With the batteries dead, the car light did not work, forcing Ayako to use her lighter, igniting the fire because of the fuel scattered. He killed her because she found him out. Ayako knew he is the killer and the trick he used. Since the garage fire was designed for Toshiaki, Kento decided to create a blackout and stab him. Togano was in the kitchen and he had the chance to manipulate the plug to create the blackout. Kento then asks Heiji for evidence, and Conan reveals that Kento did not answer a single question on the questionnaire, apparently knowing the host would be dead. Kento did all this because he despised "Irene Adler's Sneer", a book created by Hiroyuki and Toshiaki that had Sherlock's equal laughing at him. Heiji wakes up and decides to blackmail Conan into revealing who he really is. Afterwards, Conan reveals his identity to Heiji, as well as how he shrank. 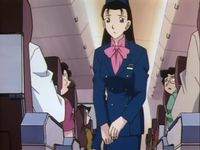