Difference between revisions of "Hiromitsu Morofushi"

Subaru has a flashback to himself as Shuichi and Bourbon covered in blood.

Scotch was first mentioned in Manga file 898. During the final part of the Scarlet arc Shuichi speaks to Bourbon on the phone and says "About him, I regret what happened. Even now...". In the Epilogue Shuichi mentions that Bourbon's grudge may be more deeply rooted than he thought. He has a brief flashback to himself and Bourbon covered in blood. During Bourbon and Vermouth's conversation, she mentions a male infiltrator from the Public Security Bureau (PSB) who had been killed before they could figure out his name. Bourbon tells her that his code name was "Scotch". 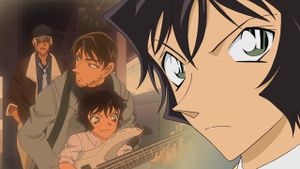 Masumi has a flashback to 4 years ago where she saw her brother Shuichi on a train platform with another man. At that time, Masumi thought that Shuichi was supposed to be in America so she approached them. Shuichi told her to go away but she made the excuse that she did not have the money to get home. While Shuichi went to go buy her a ticket, the other man pulled a guitar out of the case on his back and taught her some notes. Before Shuichi returned, a third man that looks like Rei Furuya came over and called the other man "Scotch". Masumi believed this to be a nickname rather than an indication of his race because the man looked very Japanese.

Masumi reveals to Conan, Ran, Sonoko, and Rei that her older brother Shuichi Akai is an FBI agent. Sonoko then enquirers if her brother's friend might be an FBI agent as well but Masumi denies this possibility by saying that he must have been a friend that Shuichi was meeting with while on vacation. Rei thinks to himself that Scotch was a member of the Tokyo Metropolitan Police Department Public Security Bureau and that Shuichi was the one responsible for his death.

A flashback from Rei Furuya occurs while he is daydreaming while driving around with Vermouth. He runs up the external staircase of a building while thinking of Scotch's words "I'm sorry Furuya, my PSB identity has been seen through by those people...it seems like the only route of retreat left is to the other world...goodbye Rei(Zero)". At the top of the building he finds Shuichi standing over Scotch's corpse holding a smoking gun and saying "Traitors...should be punished accordingly...right?". He wakes up to Vermouth telling them they need to pry information out of a target and then destroy them in one swoop.

Later Conan, Subaru, Ran, and Sonoko run into "Amuro" and Azusa, who Conan thinks is Vermouth, while trying to meet up with a musician who has some connection to a Rum case from 17 years ago. Rei speaks directly to Subaru, who he doesn't realize is Shuichi in disguise due to Scarlet Showdown. Conan reacts to them casually chatting and tells Subaru that they need to leave, but he doesn't want to. The group finds that the musician is already dead. At the end of the musician case it's revealed that Scotch's death was actually a suicide, as he tried to shoot himself to the chest where the bullet would have destroyed his phone where sensitive data is held.

Both Shuichi Akai and ironically, Rei (Bourbon/Amuro) played an indirect role in his drive to suicide. Being cornered by Akai, who was still undercover at the time, and without realizing his FBI affiliation, Scotch was forced to commit suicide. But as he was about to do finish the act, Akai tightly held the gun's cylinder, which prevented Scotch from being able to pull on the trigger. Then Akai revealed his true identity and motive, managing to prevent the death. However, in that moment, Rei's hurried footsteps were heard, and both Akai and Scotch took that as approaching Black members. Scotch used Akai's distraction to pull the trigger, as Rei arrived at the scene after Akai retrieved the gun from Scotch's hand. While Rei continued his investigation to try to understand more about Scotch's death, currently his conclusion is that Akai forced Scotch to commit suicide.

Rei seems to have a strong attachment to Scotch and blames Shuichi for his death. His resentment is strong enough to continue chasing after Shuichi, even after he was told that Shuichi had been killed. Judging on Scotch's last message, it seems that Rei had been aware that Scotch was a undercover agent. Perhaps they even worked together.

Shuichi has been on at least one mission inside the Black Organization with Scotch. The mission involved rifles inside bass guitar cases. During a later time, he is found standing over Scotch's bullet ridden corpse while holding a handgun. It would seem that the two of them got into a violent altercation prior to Scotch's death, in which he pretended to be beaten by Akai and used that as an opportunity to steal his gun, which was later used to kill himself.

Sera recalled meeting Scotch 4 years ago, when he was with Akai and Rei in a train station. Sera also remembered Scotch teaching her how to play the bass and though it was only 10 minutes, she seemed to enjoy it. Sera is not sure of Scotch's true identity or allegiance, but thinks that Scotch is Japanese and that Scotch is not the real name.

Yuya Kazami was a his comrade.