Difference between revisions of "Find the Buttock's Mark"

One rainy on the way from school, Ayumi collides with an escaping phantom killer and she isn't able see the face of the killer, due to him being concealed with a hat and hood. The phantom killer fells upon colliding with Ayumi and drops his knife he used for a recent slasher attack. Once the phantom killer gets up, he faced Ayumi and reaches out to her. Ayumi screams in fear of harm, but he only picks up a small object from the ground and then flees the scene afterwards. A clue is left behind when Ayumi realizes a mark on her hand that resembles a number 5.

Ayumi and the Detective Boys are taken to the police department to provide information regarding the phantom killer, but the only thing provided was that the phantom killer was a man through Ayumi hearing his voice, but that provided little help. With Detective Sato they all returned to the scene of the crime and found out the mark left on Ayumi was of a car brand. Genta was also found with the symbol on his butt from sitting on Detective Sato's car logo. With this added information, the culprit has been narrowed down to those with cars of the same mark.

The suspects have been narrowed to three people: Hiroshi Enomoto, Naokazu Fukuchi, and Toshiaki Degawa. Ayumi iss willing to face the suspects to find out who is the phantom killer, but Haibara objects to that plan due to concern for Ayumi's safety. Haibara explains to her how the culprit would bear a grudge on her if she places the culprit in that kind of predicament and how he may also seek revenge if he is acquitted due to a lack of evidence. As a precaution, Ayumi and the others would instead watch the suspects from afar in a car with smoked glass to prevent such an outcome. 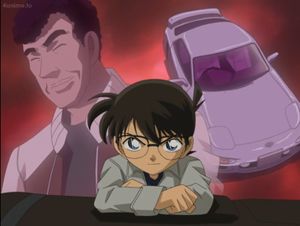 Naokazu Fukuchi is the Culprit

Based on the testimonies, the Detective Boys realize that culprit is Naokazu Fukuchi.

Fukuchi attempts to escape while pretending to let the police confirm the key lock, but is knocked out by Conan's dart. After intense interrogation, he reveals he was slashing random victims to become a renown terror and gain attention, a change to his mundane life.

Moved by Ayumi's courage, Haibara decides to decline in participating in the Witness Protection Program, knowing that she cannot fully trust the FBI and that she herself no longer wants to keep running away from the Black Organization forever. Though Jodie is initially against her, she accepts Haibara's decision and ask her to always remember the courage of this day. After Haibara left, James comments that Haibara was like Jodie long ago, as Jodie herself also refused to participate in the program unless they let her join the FBI to chase after her father's murderer. However, Jodie replies that both of them are different, as Haibara has the warmth of her friends by her side, giving her the courage to fight on no matter what the future may bring.