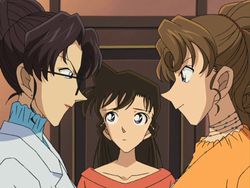 Eri and Kogoro, like Shinichi and Ran and Heiji and Kazuha, had been best friends since childhood, falling in love in their teens. Ten years before the Detective Conan storyline starts, however, Kogoro and Eri separated and took different paths in their lives.[4] Ran had believed that Eri had separated from Kogoro because he had shot her in the leg to get her away from a crazed serial killer, when in fact Eri had completely respected Kogoro for his decision, which she also believed was the correct one. She had actually left him when she had cooked him a gratitude dinner afterwards, which Kogoro assessed (perhaps rightfully) to be completely inedible.[5] After this, Eri focused full time on her duties as a lawyer and has since become a highly respected (and feared) member of her profession.

In high school, Eri and her schoolmate and close friend, Yukiko Kudo, were involved in a "Miss Teitan High School" pageant, and were tied in the number of votes, due to the lateness of Kogoro.[6] He had forgotten to vote, and by the time he had come to vote, it was too late.[6] It was later discovered that due to his clumsiness, he thought that the "Miss" meant "mistake" and was going to vote for Eri as a result of that misconception, much to her anger later on.[6] 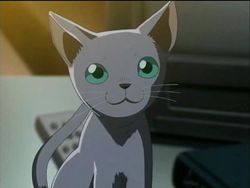 Eri is considered incredibly attractive. Various men of different ages have pined for her, but she always turns them down, mostly due to her feelings for Kogoro.[7][8][9] She and Yukiko were considered the two most beautiful girls at Teitan High School back when they were students.[6] However, even though the result ended in a tie, the two remained very close friends, often letting little Shinichi and Ran play together and have playdates.[10] Shinichi remembers often how Eri would give him a big scolding for starting trouble.[7]

Eri's personality suits her occupation as a lawyer. She is often very questioning, and gets herself involved in the investigation of cases along with Kogoro, much to his chagrin. She has a cat, a Russian Blue named "Goro," whom she cares for very deeply; in fact, Goro's name comes from "KoGORO" of Kogoro Mouri, since to her the cat and Kogoro both act very similar in some ways.[11][8] Eri is also very close friends with her secretary, Midori Kuriyama.

Eri is highly intelligent and has a sharp eye for details, and is also a skilled judoka, taught by Kogoro himself.[7] She has proven on more than one occasion that she can lend a big helping hand in cases, and her deductions are almost always accurate.[6][9] Ran often goes to Eri for advice, especially on Ran's relationship with Shinichi.[12] Eri has often half jokingly said that her best advice for Ran is to never get involved with a detective.[7]

Her worrying about Goro has once caused a big misunderstanding with Ran, thinking that a veterinarian was trying to go out with Eri when he was only trying to help her cat (although it is shown in the end that he was really hoping to get involved with her).

Even though Eri is separated from Kogoro, and has been for quite some time, she still cares for him, and loves him. She often mentions that she would go back to him if he would just be a little bit nicer and not act immaturely to her.[7] Very often, she sees Kogoro treat her nicely and gets hope, but then he does something stupid that angers her again, ruining any hope she has of them being back together. She remembers many very important dates in their relationship, and it is found out that she and Kogoro share many things in their minds, including the idea of wearing the outfits both wore on their first date on its anniversary (each of them made this decision independently).[8] Very often, their daughter, Ran, tries to get them to hook up with each other by planning out ways for them to see each other out of the blue.[13] Ran also tries getting Eri to help give Kogoro clients.[14]

In The Fourteenth Target, Eri and Kogoro are shown having a great time eating dinner, but it ends when Kogoro looks out the window and sees the very attractive owner of the bar that he visits.[5] This makes Eri turn angry and act how she normally acts to Kogoro. In the two-part episode, Scuba Diving Murder Case, Eri accidentally loses her wedding ring on the beach, but pretends to have left it at home to see if Kogoro noticed.[13] She gets visibly angry when Kogoro doesn't appear to notice it, especially when he leaves their lunch early to go back to the beach.[13] Later, it is discovered that Kogoro had always known that she wasn't wearing her wedding ring, and had gone back to the beach to look for it.[13] This left a visibly shocked Eri to drive home speechless, but pleased.[13]

In another episode, Eri actually captures a confession from Kogoro saying that he misses her and wishes she would come back to him on a minidisc, replaying it over and over again afterwards.[9] However, even though they both miss each other, both of them still pretend not to care, and even become incredibly nasty to each other.[13] Kogoro even goes on the opposing side of a case that Eri is working on, in a plan done by her professional rival Reiko Kujo to try and get under Eri's skin.[15] However, her plan fails, as Kogoro's testimony is able to help out Eri's case instead of Reiko's.[15]

Ran Mouri is the only daughter of Eri Kisaki. She often tries to find ways to bring Eri and Kogoro closer together. Ran often seems to be closer to her mother than to her father, although Kogoro is the one that takes care and provides for her so they can