CJ CGV proclaimed that they will broadcast the 6th TV special of Detective Conan — Episode One: The Great Detective Turned Small —on April 21, 2017. In 2019, HTV3 bought the rights to a new episode and stopped broadcasting from episode 460 (440 Japanese). Later, these episodes were purchased by POPS Worldwide and replayed on the digital platform and continued to air the next episodes. POPS Worldwide announced that it has purchased the copyright of a new episode on the POPS application, POPS Anime Channel on YouTube and broadcast at 10 am on February 1, 2022 and stopped broadcasting from episode 602 (569 Japanese). Some voice actors have been changed.

In order to promote the 25th movie The Bride of Halloween, the POPS application decided to broadcast Movie 22 Zero the Enforcer on 10th June, as well as the Detective Conan spin-off Wild Police Story anime adaptation would start from 24th June and the TV special Love Story at Police Headquarters ~Wedding Eve~ on 8th July. 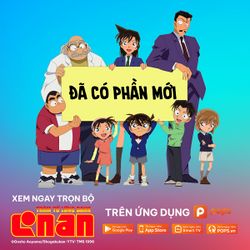