The manga has been adapted into an anime series by the animation studio Tokyo Movie Shinsha, directed by Kenji Kodama (episode 1 to 252), Yasuichiro Yamamoto (episode 110 to 332, 667 to 677, 681 to the last episode to date), Masato Sato (episode 318 to 504), Koujin Ochi (505 to 666, and 678 to 680), and is broadcast in Japan on Nippon Television, Yomiuri TV and Animax. The series debuted on January 8th, 1996 and will have broadcast 897 episodes by March 24, 2018. The series has seen high levels of popularity in both manga and anime formats in Japan since its reception, and has also been adapted into nineteen Golden Week movies, with the first released on April 17th, 1997 and since then followed with a movie released each year, always in the month of April. Ten of the movies held a top 10 box office position in the year they were screened. In addition, five Magic Files related to the movies and twelve Original Video Animations have been released..

Besides his anime and manga appearances, Conan is the protagonist for all the movies and the video games based on the Case Closed series. Several anime and games have parodied, lampooned or otherwise mentioned him or the series. Some of them include: Yakitate!! Japan,[22] Black Cat,[23] Inuyasha,[24] Hayate the Combat Butler,[25] Proposal Daisakusen,[26] Sonic X,[27] Kenichi the Mightiest Disciple[28], Angelic Layer[29], and Apollo Justice: Ace Attorney[30] In case of Inuyasha, Detective Conan features Conan reading Inuyasha manga first in Episode 200 (aired July 24, 2000). Later, Shinichi and Ran made their cameo appearance in Inuyasha episode 128 (aired October 13, 2003). 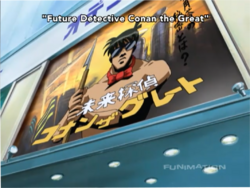