Difference between revisions of "Conan and Heiji's Nue Legend"

The fact that Azusa's doppelganger was playing her in the previous episode is revealed when Azusa says that she didn't go to the concert hall. However, only Conan and Amuro himself knows that the doppelganger was actually Vermouth in disguise. Conan thinks that since Vermouth bothered to investigate, the Black Organization must really be interested in the cipher left by Koji Hanneda seventeen years ago. Azusa also reveals that she saw a strange duo in front of Mouri Detective Agency talking something about "cleaning rags".

The strange couple was actually Heiji and Kazuha. They were talking about "rags to riches" which has a similar pronunciation. They came because the mayor of Yadori village had found an important clue and sent Heiji a letter requesting help to unearth Tokugawa's buried treasure. Kogoro is nonchalant to the idea since the treasure will end up belonging to the government anyway. Scared of the dangers of treasure hunting, Ran initially refuses but consents when Kazuha and Heiji suggest that Shinichi might be invited there too. 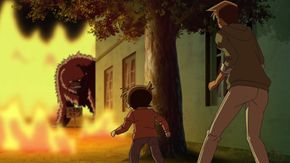 Nue appears in the middle of the fire.

The culprit is Fumie Masuko. She faked the Nue by putting fake fur on the dog and used the fired she created with metallic sodium and a painting of the wall of the house to create an optical illusion. Fumie admits she killed the two victims because Charles Abel was her husband and the two didn't save him back then. Heiji also reveals that Hajime is the son of Fumie and Charles.

Heiji tries to confess his feelings for Kazuha, but is disturbed by the Japan Air Self-Defense Force landing nearby on the orders of Yokomizo to capture the Nue and secure civilians. Surrounded by soldiers, Heiji decides not to confess. Some time later, the high-school student Momiji Ooka reads about the case on her smartphone and calls Heiji her future husband.

For the full gallery see: Conan and Heiji's Nue Legend/Gallery