Difference between revisions of "Conan Edogawa and Ai Haibara" 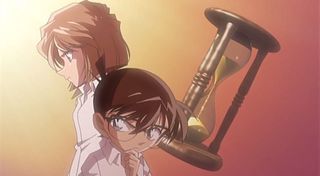 Conan Edogawa and Ai Haibara share an interesting relationship. Initially, Conan was suspicious of Haibara for being part of the Black Organization and the inventor of APTX 4869, but he has since warmed up to her as a valuable teammate and someone to confide his thoughts with when they conflict with his child cover. On her part, Haibara expresses interest in Conan's personality, intelligence, and sense of justice.

Conan refuses to sit in the machine out of fear that his and Haibara's secret will be revealed.

Initially, Shinichi mistrusts Shiho Miyano, now Ai Haibara, because she is a member of the Black Organization and created the deadly drug APTX 4869. Professor Agasa convinces Conan to give her a chance because she has the best chance of creating an antidote. Ai, who grew up within the Black Organization, is quite cynical at first about Conan's ideals and sense of justice, causing them to quarrel often during their early cases together. Eventually, Conan's hopeful and steadfast personality seems to bring her around. For his part, Conan watches out for Haibara's safety, and protects and rescues Haibara on multiple occasions. Despite being shrunk to Conan by the drug developed by Shiho and having his life upended, Conan only carries his hatred towards the criminal Black Organization and not to Haibara personally. He also trusts her as a confidante and values her maturity. For regular cases, they often work as an investigative team running ideas off of one another, teaming up to corner the culprit, and explaining the solution. When Haibara is around, she is usually the first to understand Conan's intelligent moves. Haibara often serves as a reality check and reminds Conan to act more like a child in order to protect his identity, and vice-versa. Curiously, they are the only pair who have disguised in each other's body, although in two different occasions.

The Black Organization is the source of the most trouble in their relationship. Because of several early situations where Haibara panicked in the presence of a nasty Black Organization member or tried to sacrifice herself, Conan developed the bad habit of downplaying the involvement of the Black Organization in various affairs in order to not upset Ai. Even though Haibara has become more resolute, Conan is still reluctant to discuss what is on his mind or his plans when it involves the Black Organization. Haibara has become keen at identifying when Conan is hiding something from her, but only rarely does Conan capitulate. Haibara in turn conceals much of what she knows about the boss and the goal of the organization, perhaps because she is worried Conan will rush in prematurely and get himself killed. In fact, she has always know that Renya Karasuma is the Black Organization head, but she never reveals it for Conan's safety. This mutual distrust occasionally results in situations that could have been handled better if they shared information.

Their closeness has caused a number of people taking it as they are in a "special" relationship. In canon, that includes:

In non canon, this also includes;

Even though Shinichi's single-minded focus on Ran blocks any potential romantic development, Ai has handled any feelings of jealousy gracefully. Occasionally she will tease Shincihi about his Ran obsession. Haibara is sometimes asked by Conan for one of the protoype antidotes she created, mostly to solve relationship issues with Ran. However, Haibara very rarely grants his wish, often teasing him about his relationship with Ran in the process. It is unclear whether Haibara withholds APTX 4869 antidotes from Conan for a medical reason, fear that Shinichi will be indiscreet, or just to meddle with his love life. However, in more recent cases, Haibara has been more supportive to Shinichi and Ran's relationship, providing him the antidotes and having other people to cover for Shinichi.

The Girl from the Black Organization and the University Professor Murder Case (Manga: 176-181, Anime: 129) 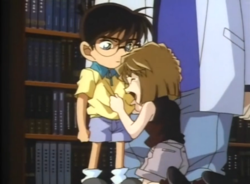 Conan/Shinichi says"That...was probably the first true face she ever showed me."

"Haibara shows her true feeling in the presence of Conan/Shinichi (Scene from Closing60).

"I'm actually only 18 years old, just perfect for you." 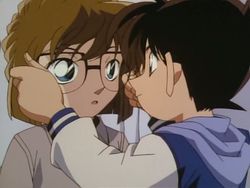 Conan puts his glasses on Haibara.

Haibara fires a gun of roses at Conan to encourage him to avoid telling Ran his secret identity. 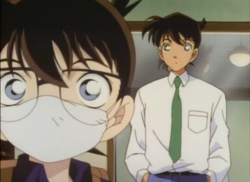 "Hey Haibara, why are you going this far for me?"

It is revealed that Conan knows Haibara's true name, Shiho Miyano and the codename Sherry, but he never calls her that despite her calling him "Kudo-kun". 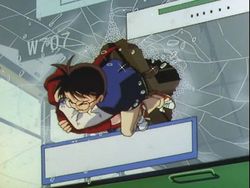 Conan rescues Haibara from an explosion. 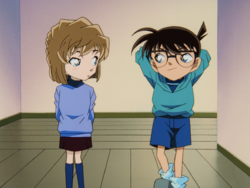 Haibara blushes when Conan tells her to keep smiling. 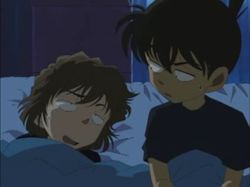 Conan and Haibara were sleeping side-by-side. 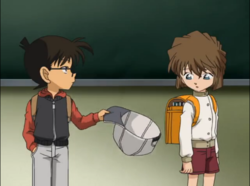 Conan lends his cap to Haibara.

Haibara and Ayumi blushing and angry that Conan might have peeked at them.

Movie 6: The Phantom of Baker Street

"Aren't you being a little too forward for a kid?" 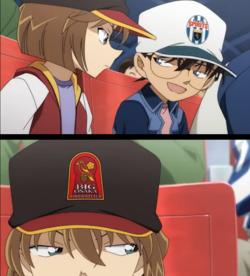 "You're not being honest." 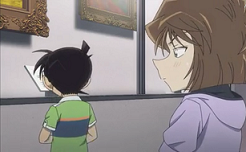 "Young lady, it seems that something other than the sunflowers attracted your eyes."

"If I stare at you for long, I will end up regretting my life."

OVA 7: A Challenge from Agasa! Agasa vs. Conan and the Detective Boys

OVA 12: The Miracle of Excalibur

TV Special: The Disappearance of Conan Edogawa: The Worst Two Days in History

For the full gallery see: Conan Edogawa and Ai Haibara/Gallery