Difference between revisions of "Case from 17 years ago" 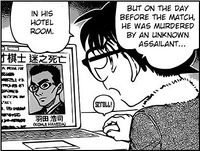 Conan reads about the case online.

Seventeen years ago Kohji Haneda and Amanda Hughes were found dead in their hotel rooms. Kohji had managed to leave a mysterious dying message that may indicate that a member of the Black Organization was involved.

Kohji Haneda, a shogi player, went to the US to participate in a chess competition at the Juke Hotel, however the day before the match he was found murdered in his hotel room. According to a website with numerous photos of the crime scene, his room was a total mess which was chalked up to a struggle between Kohji and his assailant. The website reported that the cause of his death remains unclear, but Haibara recalls his name was on the APTX 4869 victims list. On the same day in a different hotel room Amanda Hughes, a wealthy person who has contacts with both the FBI and CIA, was found murdered and the cause of her death is also unclear.

Amanda had been a fan of Kohji's and had been in contact with him in the past. She had visited his hotel room some time before the murder, her fingerprints were found on the door handle, sofa, tea cups, knife, and fork. After the murder there were tea cups, plates, and a hand mirror found smashed on the floor of Kohji's room. Several defensive wounds were found on Kohji's arms and his palm was bruised from gripping a pair of scissors very tightly. There were some bruises on his face as well. In Kouji's room, the sink in the bathroom was even left running. Amanda's own room, on the other hand, was neat and tidy, as though nothing had happened. It is not known who was murdered first.

On the day of the murders Amanda's bodyguard, who she called "Asaka", disappeared. Currently Asaka is the prime suspect in both murders. Neither relatives or acquaintances of Amanda know when Asaka was hired on as her bodyguard. It is currently unknown whether Asaka is a given name or a surname. If it were a given name then it would be likely that Asaka would be female, however if it were a surname then it would not be possible to determine the gender. At some point Asaka was seen holding a hand mirror, which leads Gaito Hotta to believe that Asaka is a woman. As a bodyguard, it is thought that Asaka is skilled at bringing down opponents.

Rumi Wakasa has had a flashback of meeting Kohji. During this flashback, Kohji was in possession of a Bishop (Kaku) shogi piece and says a shogi proverb related to the piece. Rumi's flashback also includes Kohji's body after the murder. Currently, Rumi seems to be in possession of the Bishop shogi piece. She has carried the piece with her in her back pocket, as well as placing it face down on her desk near her laptop, showing its promoted side (Ryuma). She remembers Kohji has being a fool and, when Conan asked her what she was doing, she had difficulty to come back to her senses, which means this flashback really marked her.

Kohji kept the Bishop shogi piece as a good luck charm, which was missing at the crime scene of the murder. It was thought by the police the murderer took it.

Tsutomu Akai was either involved in the case or its aftermath. As a result, he made enemies with some really bad people (Black Organization) and sent a message to his family telling them to move to Japan for safety. Since then Tsutomu has not been seen, leading many to believe that he is dead. However, his body has never been found and his death is thus unconfirmed.

Gin comments that this case is a job in which Rum screwed up, clarifying that Rum was present, or at least involved some way or another, and that things did not happen according to plan back then.

Mary Sera took her family to Japan as instructed by her husband's text. Mary also gave birth to Masumi around that time. Shuichi Akai then left his family to study abroad in the United States with the intention of obtaining a green card and joining the FBI to find out what happened to his father. Shukichi Akai eventually leaves the family as well, changing his family name to Haneda. He also claims to be a non-blood brother of Kohji and possesses his fan that has his motto.

When Conan learns that the case involved APTX, he finds information about the case that had been uploaded to the internet. Even when it gets taken down the person who uploaded it tries to re-upload it. Conan thinks that it's almost if they are saying "Please help me solve this mystery!".

Gaito Hotta had obtained information that states that Asaka had been seen holding a hand mirror to claim that Asaka was a woman. However it is unclear whether this is first or second-hand information. Mary thinks that this information was "boring", seemingly expecting to know more information about Asaka from the so-called "soul detective" Gaito.

A woman whose name, Rumi Wakasa (若狭留美 ,Wakasa Rumi?), bears similar spelling to the dying message of the Kohji case appears at Conan's school. When Hyoue Kuroda learns of this person's appearance on the news, he seems to make a connection between her and the Kohji case and implies that he might know her by saying "that's not like that person at all" when he was told she was going camping. She also keeps Kohji's good luck charm, the Bishop shogi piece inside her back pocket.

Currently the list of people who know about the case are as follows: Conan, Haibara, Agasa, Shuichi, Masumi, Mary, Kogoro, Gin, Vodka, Bourbon, Vermouth, Kuroda, and Rumi. Shukichi seems to be aware of Kohji's death, but it is unclear what he knows, or what his connection to Kohji is, since he is called a 'non-biological brother'.

After the murder there were tea cups, plates, and a hand mirror found smashed on the floor of Kohji's room. The mirror had writing on it that Haibara recognized as saying "PUT ON MASCARA", however it had been broken so that only "P T O N" remained. Kohji's palm was bruised from gripping a pair of scissors very tightly. The sink in Amanda's bathroom was even left running. It seems as if Kohji was attacked in the bathroom and turned the sink on, then ran water over the mirror to use the scissors to cut the mirror up, although it's unclear how he managed to do that during such circumstances. With the letters "P T O N" removed, the message remaining is "U MASCARA", which can be arranged to make "ASACA RUM". Though this is a way to decipher the dying message, it's unknown if this is the correct way to interpret the message, or that it was originally created by Kohji, or if the message was altered at all by someone.

It is theorized that the Bishop shogi piece in Rumi's possession may also be a part of the dying message, that she removed from the scene. There is a slight bruise in the palm of the hand that Kohji held the scissors, the piece may have originally been there.

The Black Organization is aware of the dying message. Because of the "ASACA RUM" interpretation they seem to be chasing any references to ASACA that they find.

Some time after, Subaru discussed the dying message with Yusaku, and both arrived at the conclusion that the message might only form one word: "CARASUMA", which refers to Renya Karasuma, a multi-millionaire who is supposed to have been dead for at least forty years, and who might be the Black Organization's head.

Even though the cause of death is unclear in both cases, only Kohji's name appeared on the APTX 4869 victims list. However it is interesting to note that Kohji's name appeared two names below Shinichi's name on the list. Haibara thinks that the person who compiled the victims list may not have compiled it chronologically, but rather in some other fashion, like blood type.

Since Haibara states that the drug she worked on was created from the burnt remains from the data left behind by her parents, she says that its possible that Kohji was made to ingest an early prototype made by her parents. Haibara hasn't mentioned whether Amanda Hughes' name is on the list or not.

Rumi, who we now know was present 17 years ago, is currently in possession of the APTX victims list.

The motive for the murders is unknown. In Kohji Haneda's case, Haibara suggest it might have been because he was close to Amanda Hughes. If that's true, then that means that Amanda was the main target, possibly because of her connections to the FBI and the CIA.

Conan suspects that Asaka is Rum, based on that the missing letters from the mirror spells out ASACA RUM. Conan also suspected that Mary is Asaka, by thinking that Asaka is a strong woman.

The one putting the case online

A mysterious individual, the uploader, is in possession of detailed crime scene photographs and case information. This includes pictures of Kohji's dying message hand mirror broken on the ground prior to Asaka removing a hand mirror from the scene. This unknown uploader posts this information online, seemingly asking for the case to be solved.

Information about the case was online at the time Okiya and Conan solved the "The Clenched Scissors and the Clipped Letters" case, but was removed by the beginning of the "Soul Detective Murder Case". The reason why the information was deleted and the identity of the one doing the takedowns (perhaps the uploader themselves or another force who wishes to scrub the essential details of Kohji's case from the internet) is still uncertain.

It should be noted that current Police Superintendent Hyoue Kuroda has access to the information on the website and seems to see some sort of connection to Elementary teacher Rumi Wakasa. Some fans speculate that it is possible that Rumi is the one uploading the information to the site due to her name being a close letter scramble of the dying message ASAKA RUM and her method of approaching Conan.

Alternate interpretations of the mirror

In the picture of Kohji's hand, there are several bruises on the fingers and one on the center of his palm. These are presumed to be from holding the scissors tightly. Kohji's method of holding the scissors is unclear, but the bruises are consistent with looping one's thumb and index finger through the two rings so the rings as close to the base of the fingers. If the blade is angled across the palm and the other three fingers folded over, it makes a defensive-like pose. This grip does not explain the bruise in the hollow of his palm. If a defensive grip was used, then the bruise must have been caused by an item secreted in Kohji's palm he was gripping along with the scissors, holding the scissors another way, or another force altogether. It may also be of concern that despite supposedly gripping the scissors tightly in life, after Kohji was killed and the body photographed, the scissors were elsewhere nearby and Kohji's hand opened.